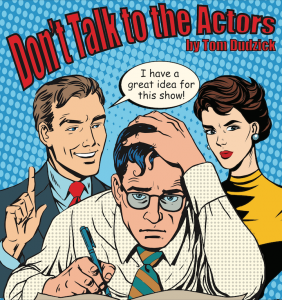 Don’t Talk to the Actors

A Comedy by Tom Dudzick

Best-laid plans run amuck when the cast of a Broadway-bound play resorts to manipulation, diva-like behavior and chaotic abandon to get what they want. The fledgling playwright and his fiancée are suddenly swept up in the whirlwind of the NY theater scene: big money and the ego-driven world of Broadway. A playwright’s “dream-come-true” encounters the crazy characters and dilemmas theatrical nightmares are made of.

Based loosely on the playwright’s experiences putting up his first NY play, this is comedy at its side-splitting