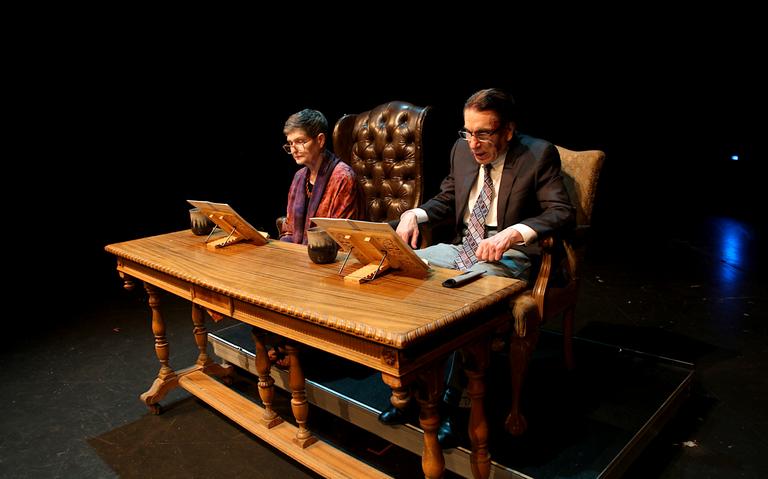 Anne Black-Sinak and Larry Sinak read their lines at the first in-person rehearsal for Rochester Repertory Theatre’s “Love Letters” on Tuesday, June 8, 2021, at the black-box theater at Rochester Civic Theater.

Anyone who’s acted in live theater knows the scenario: You’re about to go onstage, everyone is waiting for you, and you don’t know your lines.

Two experienced actors are preparing for a show that will make that anxiety dream a reality.

Rochester Repertory Theatre is resuming live performances with “Love Letters,” featuring veteran stage actors Anne Black-Sinak and Larry Sinak. The show opens Friday, June 11, and neither actor is expected to have the script memorized. And neither is a bit worried about it.

They’ll have “scripts” in front of them — the letters their characters exchange over decades of friendship and, later, more than friendship.

The play’s author, A.R. Gurney, specifically instructs directors not to have the actors memorize their lines. The “lines” are letters that begin as a series of thank-you notes after a birthday party where the characters met. Later, they exchange summer camp postcards, and then continue the correspondence through school into adulthood.

Because the actors are married, they aren’t required to maintain a distance under COVID-19 safety protocols, which helped make the show a contender for director Mary Pyfferoen. However, she said her choice was motivated by more than logistics. Pyfferoen wants people to consider their relationships after a year of distancing, she said.

“Part of what drew me to this show was how a relationship can keep going and growing no matter the distance, the time, or isolation,” she said. “I think as we’re coming out of all this isolation, it’s important to start thinking about our own connections and realize that it’s not too late to reach out.”

Pyfferoen said not memorizing the lines can evoke a more honest emotional response to the letters’ contents.

“You want to get to the feeling without going over the top or trying to force it,” she said.

The show will be performed at the Rochester Civic Theater Black Box space. The Repertory Theatre’s building is still under renovations, and its theater space doesn’t have the room to accommodate COVID distancing guidelines.

The show includes no blocking or stage directions. Subtle lighting changes help enhance or reflect the mood of the letters. With the show opening Friday, the director, stage manager and lighting technician met Tuesday for the first in-person rehearsal.

Pyfferoen said she isn’t worried. “I trust (Sinak and Black-Sinak) implicitly,” she said.