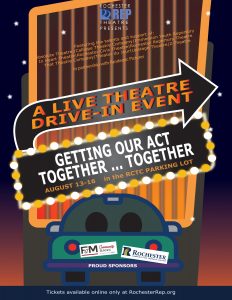 Drive-in theater is making a comeback in the age of COVID, and stage theater is getting in on the act.

Dubbed “Getting Our Act Together … Together,” Rochester Repertory Theatre is leading the drive-in experience. It will feature multiple acts, music and performances in collaboration with seven other theater groups Aug. 13-16 in the Rochester Community and Technical College parking lot.

The idea came from the Rep’s reluctance to let go of their summer musical — “Evil Dead The Musical.” A short-lived plan to perform it as a drive-in was abandoned due to logistical hurdles.

“But we just couldn’t let go of the idea of doing a drive-in,” said Sue Schnell, managing director of the Rochester Rep.

Instead of the musical, actors, singers, musicians and performers from eight area theater companies will participate in a showcase variety performance. Greg Miller, Jerry Casper and Nick Mezacapa will emcee the event.

“They’re a team of guys that are great fun to watch,” Schnell said.

Pandemic Pictures will provide the stage and, as usual, dedicated volunteers will bring the production to life with lights, sound and props.

Rep actors from “Evil Dead The Musical” will perform scenes from the show, and the company plans to perform it for audiences next year. The play publisher is allowing the group to present the scenes this year for free as a preview to next year’s production, Schnell said.

“We’re reevaluating the next two seasons,” she said.

The Rep will present “Red,” which was scheduled for this spring, in October in the black-box space at the Rochester Civic. That space allows for a bigger audience under mandated distancing guidelines than the Rep could offer in its smaller space.

It’s also intact at the moment. Rep leaders decided to move forward with renovations of their bathrooms while they were shuttered during the pandemic. The Civic agreed to share its space to give them a temporary home while the work is completed, and about four times the size audience they could have fit in their theater. “Red” is tentatively scheduled to open Oct. 8.